Fast food chain shock foods follow what America has always done – from colonization, to privatization of public utilities to the dawn of the gig economy

With crispy skin of an obviously artificial hue, the KFC Double Down was initially launched as an April Fool’s prank in 2010. But the allure of the sandwich, a piece of fried chicken topped with melted cheese and special sauce slapped between two pieces of fried chicken (in the place of a bun), proved so ineluctable, the valence of absurdity was dissolved. The Double Down quickly became a legitimate meal-choice for millions of consumers. Over 10m were sold in the US in its first month alone, and after being taken off the menu in late 2010, it returned to the market in 2014.

If that storyline sounds familiar – a joke candidate mutated into a nightmare reality – it isn’t just because of the US election cycle. Across the world, as food has transitioned from fuel into spectacle and its production from individuals to profit-driven corporations, we have edged toward the extremes of what we can be convinced we want to eat. Good taste was once a virtue. Now it is a sign of weakness.

Good taste was once a virtue. Now it is a sign of weakness

The names of recent popular shock foods read like an cadavre exquis of foodstuff. Besides the Double Down, one can engorge on Taco Bell’s Nacho Cheese Doritos Taco Loco Supreme, a taco whose burrito shell has been replaced with molded Doritos; Jack in the Box’s Big Waffle Stack, being two eggs, bacon, ham and cheese twixt a pair of waffles; and Pizza Hut’s infamous hot-dog crust pizza. A New York pizzeria just debuted a pizza inside a box made of pizza. And just last week, Burger King rolled out the Mac n’ Cheetos, deep fried sticks of cheese and macaroni enrobed in a Cheeto-flavoured crust.

Taco Bell’s Doritos Locos tacos.
Facebook Twitter Pinterest
Taco Bell’s Doritos Locos tacos. Photograph: Bloomberg/Bloomberg via Getty Images
But it isn’t just this orgiastic edible entanglement of trademarks that makes these sort of shock foods notable. It’s the athletic and imaginative positions they assume. Adjacency is too demure. Cheetos cannot be served beside macaroni, or Doritos next to tacos. One must actually be inside the other. The chicken is inside the chicken. The filling inside the chip. The noodle is inside the dust. What is Burger King’s Mac-and-Cheetos if not a modern-day Karma Sutra of stunt food?

Though this trend is most pronounced in America, it is not confined to her shores. In 2014, Burger King Japan unveiled a massively popular black Kuro Burger, whose bun was made black with bamboo charcoal and squid ink. This was in addition to its Aka Samurai Burger, with a bun and cheese tinted red with tomato powder. In 2012, Pizza Hut launched its hot dog pizza in the UK. But there is no denying that this particular genre of shock and awe food is at its root American. 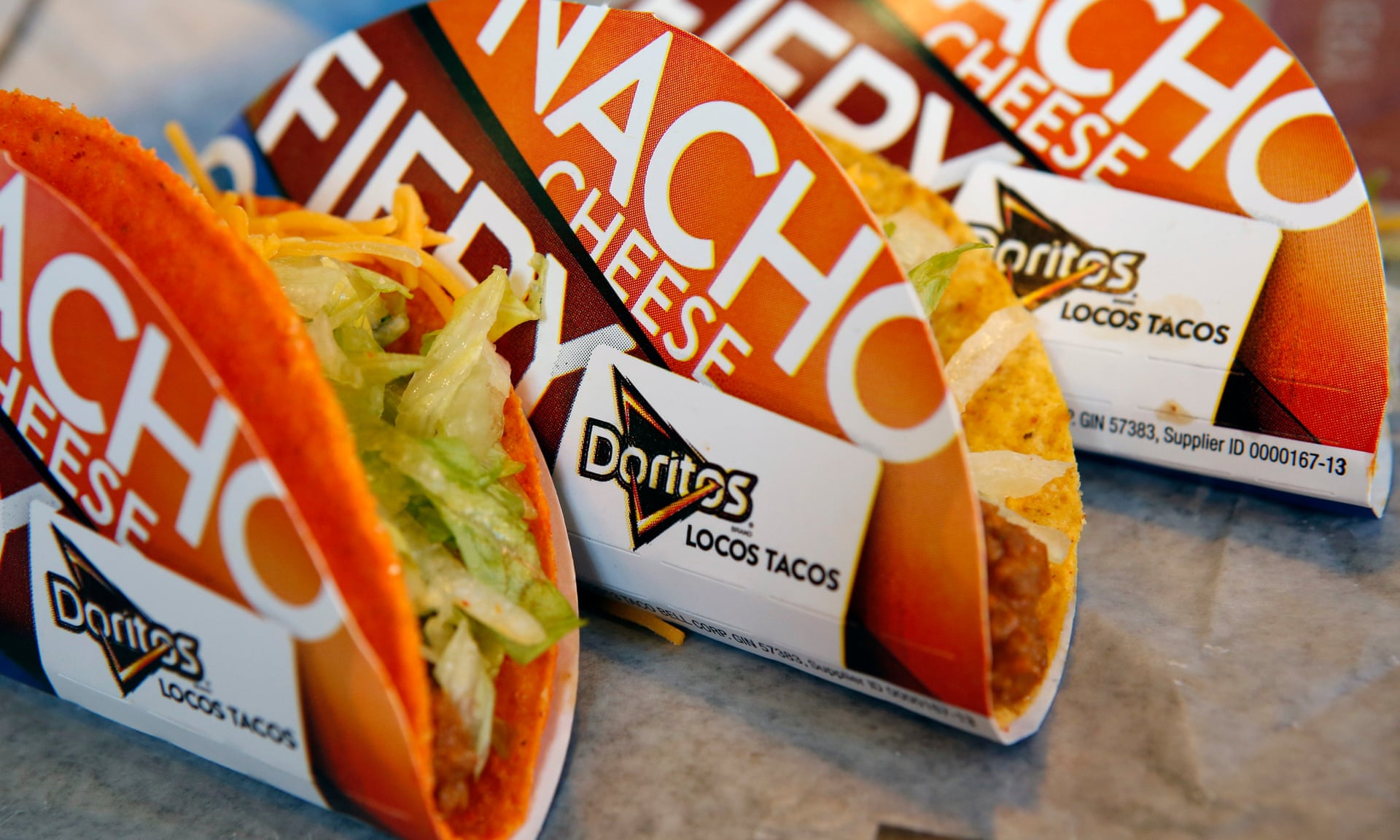 Burger King’s black burgers have black buns and cheese smoked with bamboo charcoal and black sauce made of squid ink.

Burger King’s black burgers have black buns and cheese smoked with bamboo charcoal and black sauce made of squid ink. Photograph: Keith Tsuji/Getty Images
There is something affecting, tragic and impressive about our obsession with maximizing every element. Once, bread was the neutral container for a cheeseburger, a tortilla adequate coverage for its insides and pizza crust the suitable platform for a pizza. But such is the American genius for innovation, those areas were soon deemed unacceptably underutilized. No longer content to play support roles, they became profit-centers, rich with unexplored opportunity. This shouldn’t come as a surprise. This is what America has always done. After all, wasn’t it only a matter of time after colonization, the privatization of public utilities, the outsourcing of war to contractors, the dawn of the gig economy, that we came to see a roll not as an integral part of a sandwich but an unexploited opportunity for more protein and profit?

Part of what drives this race toward ever stranger more over-the-top offerings is, perhaps unsurprisingly, money. As the Washington Post noted, as traditional fast food chains compete with fast-casual restaurants like Chipotle and Panera, they have one of two options. Either they can strive to be healthier or they can double down on the calorific extravagance. McDonald’s, which recently debuted an all-organic burger, chose the path of restraint: Burger King and KFC chose the path of abandon. There can be no quibbling that as a marketing strategy, spectacularizing food works spectacularly. Taco Bell sold over $1bn worth of Dorito Loco Tacos. The Double Down generated more than $50m in sales for KFC. Burger King’s latest gimmick has already generated millions in earned media and probably in sales as well.

But the real draw isn’t just P&L. After all, if stunt foods didn’t work so well, there wouldn’t be so many of them. The fault, rather, is not to be found in the drive-through but in our drive to find meaning and that is nothing new. Though we are now wading into unchartered territory in terms of execution, our giddy attraction to the extremes has long been with us.

Until now, we had challenged ourselves with volume and capacity. Who can forget John Candy in The Great Outdoors, who was given the task of downing a 96oz steak in the hopes of a free meal? Today, that steak would be wrapped, maybe, in a Dorito-dusted waffle and deep-fried but generally, one still gins up a life purpose by any means necessary. Sisyphus had his rock. Candy had his cow. And we, well, we have a tube of macaroni-and-cheese fried with a bright orange Cheeto crust.

READ ON THE GUARDIAN