Jazz, Jam Sessions, and the Best of After-Hours Harlem

There's more to Harlem's nightlife than you think. Want to experience it? Take this writer's advice.

---------------------------- *Bum be de BOMP. Be dop bop be da BOMP. Bum be de BOMP.* It's impossible to hear the opening lines of Charles Mingus' version of Bobby Timmons' "Moanin" and not feel immediately patched into the energy and anger that marked the great bassist's career. Tonight that riff comes out of the massive baritone sax of Clare Daly, the fairy godmother of saxophonists, who blows with the fury of a tempest. She's part of one of my favorite horn sections in town, and her riff fills and thrills all of us gathered at the elegant supper club, Minton's.

Minton's was the birthplace of bebop, back in the 1940s. It's where Thelonius Monk, Charlie Parker, Dizzy Gillespie, and Lester Young developed the sounds that propelled the century. Then, in 1974, the place burned down, its history silenced in the ashes. Recently it was reborn with the help of Dick Parsons and chef Alexander Smalls, who also run the restaurant next door, The Cecil, named Best New Restaurant by this very magazine in 2014.

I moved to Harlem a few years before that. Obviously I had seen Art Kane's famous portrait "A Great Day in Harlem," in which practically the entire pantheon of jazz greats gathered in front of a townhouse on 125th street for a portrait. I live a block away from the old Cotton Club, which now stands solo on an island of concrete near an overpass and a construction site, a faint whisper of its former self.

But one of the things that keep me in the area is the live music. It's everywhere and, despite Harlem's history, it's not just jazz. And even when it is just jazz, it's the entire spectrum of jazz, from recitals to what's happening tonight at Minton's so-called supper club. Smalls tells me he wants to create an environment where patrons aren't just sitting in reverent awe. "Jazz should be alive," he says in his own deep baritone (he used to be an opera singer). "It should be fun!" 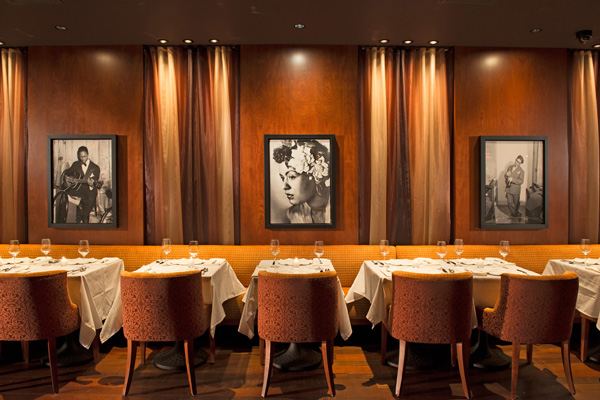 Minton's is more than fun in the sense that it feels like a community—a diverse one. The nature and history of Harlem make it all too easy to slide into exploitation. Another supper club and restaurant nearby, which shall remain nameless, traffics in a sort of black-folks-soul-food nonsense where tourists go to feel "with it." Catching a set there is like being one of those European tourists who line up outside the black churches on Sundays, waiting to pay a fee and watch a service from the balcony.

At Minton's, you're part of the choir. There's this part in "Moanin'" where—not in the original version but in this one, arranged by JC Hopkins and which his band, JC Hopkins' Biggish Band, plays—the horn section shouts out, call-and-response style. This night, we get in on it, too. Bum be de BOMP. HEY! Be dop bop be da BOMP. HEY! Bum be de BOMP. HEY! And it's not anger any longer, but joy.

Of course, Minton's is just one of hundreds of gigs going on each night in Harlem. A few blocks north in a townhouse, a saxophonist named Bill Saxton performs in the basement, dubbed Bill's Place, one of the last jazz speakeasies in the city. Farther north, there's the Shrine, a dive bar with walls covered in record labels and an awning that reads, "Black United Fun Plaza."

This organic music scene gets a virtuosic injection from Harlem's Manhattan School of Music, one of the country's top music programs. In nearly every two-bit Irish saloon, there's a weekly jam session. At Paddy's, on Broadway, MSM students gather near the skee ball alley for breathtaking, informal late-night sessions. And the sheer volume of classical music is deafening.

The bulletin board at Kuro Kuma, my local coffee shop—yes, they still have those here—is, square inch for square inch, the most interesting in the city. A pianist. A saxophonist. A Schubert concert. Supernatural experiences? Sometimes I go just for the board. And to listen to the café chatter: "Oh my god, he didn't even know what opus that was!" or "I soooo hope I'm in that quartet next semester!" Here, the baristas can make little hearts in my macchiato and are virtuosic French hornists and percussionists. What's more, they're my community. And that's Harlem. It's live music and it lives music, too.