Josh Ozersky Was My Biggest Frenemy

And I miss him.

---------------------------- It's been seven months since Josh Ozersky died and the public period of mourning is over. I almost wrote "my friend Josh Ozersky," but I stopped myself because that isn't true. Ozersky wasn't really my friend. Frenemy. Rival. Foil. Thorn. All are more accurate epithets.

Our most public interactions were a series of year-end best-of articles in the New York Observer, where I am the restaurant critic and he was a regular contributor. But we'd known each other for years, since back when he founded New York magazine's Grub Street and I was an editor writing about food at Gawker. Our rapport had been adversarial since at least 2010, when I (among others) wrote critically about his own coverage of his wedding.

But it was our annual duel at the Observer that offered us the chance to flatter ourselves Buckley and Vidal. (I'm still not sure who's who in that scenario.) The cover stories, he-said he-saids of which restaurants, chefs and dishes we found notable, appeared in late December for the last two years. Another, I'm certain, would have appeared this year too if Ozersky was still around. Perhaps that's why I'm thinking of him so much these days. On the other hand, I haven't really stopped thinking of him since May.

"Josh was a big guy." I don't know if that's on his tombstone but some iteration was in nearly every remembrance written of him. He was a definitely a big guy; and, to me, he was also complicated and vexing. I disagreed almost categorically with both his approach to food writing and his choices within it. I mean, I really took issue with a lot that the guy wrote.

And I made it personal too. The last time I saw Ozersky was in Miami at the South Beach Food & Wine Festival's 8th Annual Amstel Light Burger Bash in January 2014. Through the smoky haze in a big tent on a white beach, there was Ozersky, holding court and a slider. "Joshua," he said, "why are you so mean to me? Do you have to be nasty?" I explained that if the pieces are called "Grub Match" or "Dine-o-Fight"—which they were—we owed it to the readers to actually duke it out. It wasn't a matter of being mean or kind but of being honest. There's nothing more contemptible than an opponent who tries to make nice before the bell rings.

And Ozersky never really came out of his corner fighting. He weaseled; he agreed; he gave in; he complimented. It made me mad, and it still makes me mad. Though he's gone, I fight with him in my head. Some of the quibbles are over things he did in his lifetime: his obsession with bacon was silly and insidious. Everything he wrote about Brooklyn was trolling. In a 2012 story called, infuriatingly, "The Truth About Brooklyn's Overhyped, Undercooked Restaurant Scene," he made the bald claim, "Brooklyn, taken as a restaurant city, sucks." Wrong then; wrong now; wrong forever.

Others are over issues on which I imagine he'd hold a bad opinion. As a restaurant critic, I—naturally—try a lot of new restaurants. As did Ozersky in pursuit of Esquire's annual Best Of list. And there's not one restaurant I go to that I don't have a little adenoidal Ozersky voice in my head. "Enough with the fucking radishes!" he says. At Semilla, Santina and Superiority and other vegetarian or veggie-forward places that I love so much, I can sense his eyes narrow with suspicion and face bloat with rage until he screams, "What's a guy gotta do to get a slab of meat?!" He still doesn't get it. 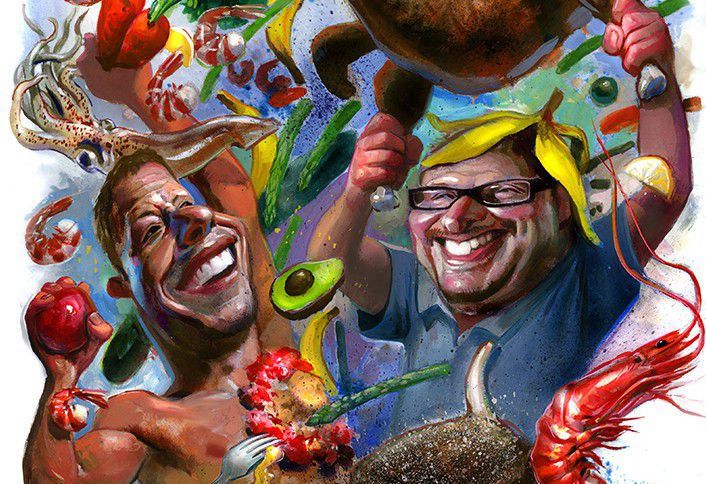 Holding this anger is like leaving blank the field for "Zip Code" when trying to send in an online form: I'm stuck submitting and resubmitting for eternity. So I keep my anger fresh and feed it with imaginary feuds. I take Ozersky out to eat with me everywhere I go. To be honest, he's a shitty companion and more often than not we end up yelling at each other. But at least he's still here with me.