The Almighty Return of the All-American Chino

And what a good pair can do for you. 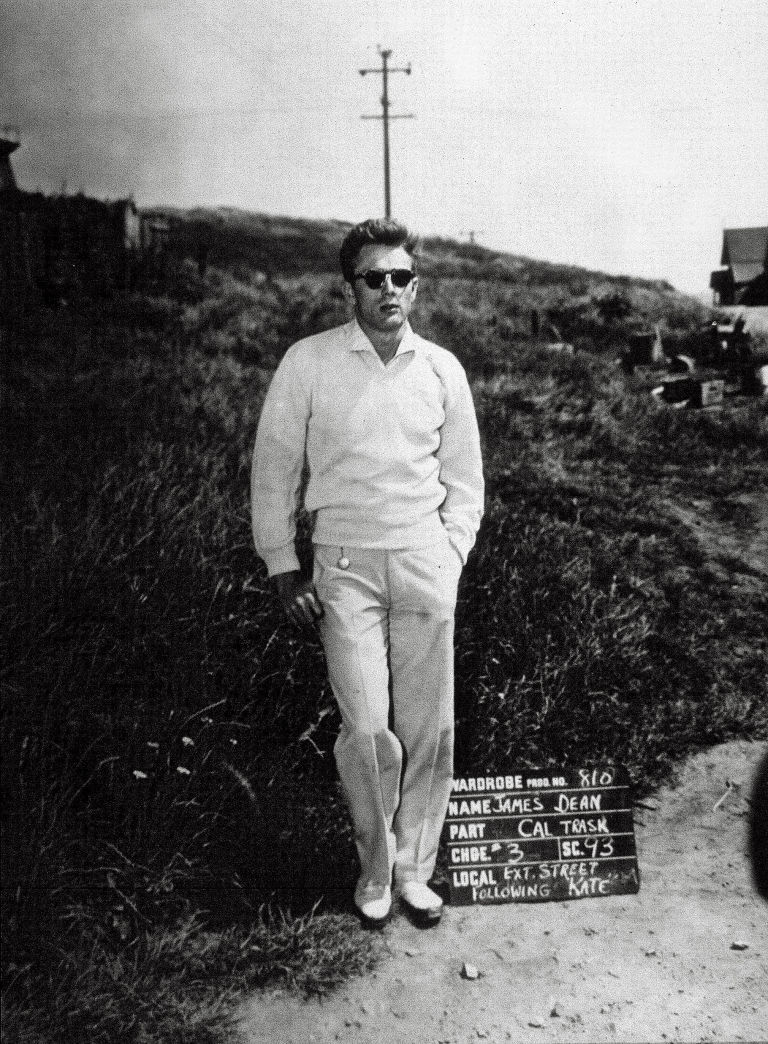 Stare at a pair of chinos* long enough and a story will begin to emerge. Put a pair on and into the slipstream of history one goes. In a photograph taken of my father's father, my Papa Frank — dated 1944, when he was working as a research physicist on the Manhattan Project — he smiles with his arm around a young secretary, later my Grandma Ellie, under an old American elm at a botanical garden. He wears a plain white T-shirt and a pair of standard Army-issue khaki chinos. There are no pleats, there is no billowing: just cotton twill fabric in a straight-leg silhouette. He was still young, and America was still refulgent. He served in what Studs Terkel called the "Good War," along with so many grandfathers of men my age. And when they came out the other side, the GIs and the pants that constituted the Class C Army field uniform matched the entire country forward to a period of prosperity hitherto unknown. Onward Chino Soldier.
*A note about terminology: Khaki will be used to refer to the sandy-tan color many chinos are, while chinos will refer to a pair of cotton twill pants that are often, though not always, in said khaki color. Esquire

Cut to his son, my father. Early memories are from the point of view of a short eight-year-old trailing him like a puppy as he left for work. It's all flashes of double pleats on khaki chinos, a beeper on a woven belt, the growl of the garage door opening, and the overweening smell of Obsession for Men (top notes of bergamot, low notes of longing). For men who came of age in the '80s and '90s, there's no romance or optimism about chinos — they were the billowing sails our fathers wore to work at desks. How, in the course of a generation, did the preferred wear of my Papa Frank (and chino fan Albert Einstein), as well as that of iconoclasts like Steve McQueen and James Dean, Bowles in Marrakech, Isherwood in Berlin, William Holden in Picnic, and Bobby Kennedy in Hyannis Port, become the unofficial uniform of the cubicle? And how did chinos come to recapture their mojo these past few years? 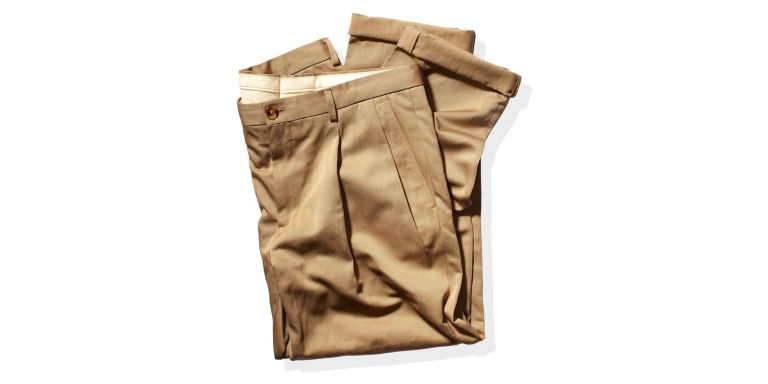 Pleated chinos ($295) by Michael Kors.
It all sort of begins and sort of ends with Dockers, the 30-year-old slacks juggernaut that sells seven million pairs of chinos worldwide every year. In 1992, when Dockers' parent company, Levi Strauss & Co., sent 25,000 human-resources managers a style guide — filled with models with unwieldy phones wearing chinos and sporting L.A. Law haircuts — a sand-colored pants storm swept through the workplaces of America. The guide contained sagacious advice, like "Try wearing a button-down shirt with khakis and loafers," and "Trendy or 'high-fashion' clothing may communicate a whimsical or pretentious attitude that is not suitable for many offices." And thusly were the workplaces of America enveloped in a barren dust cloud of beige.

“Everyone had forgotten that chinos are cool pants that go with everything.

Dockers, Brooks Brothers, Gap — the unofficial clothiers of corporate America — all introduced full pants with double pleats as an antidote to suit-wearing conformity. They became the ill-fitting pillar of "business casual," the real tragedy of which wasn't the death of the suit but rather the appropriation and eventual gutting of all the chino stood for. Once the pant of adventure and opportunity, by the mid-1990s "Chinos became capitulation," according to Doug Conklyn, the head of global design for Dockers.

"Chinos had become a punchline," says Michael Bastian, who was the men's fashion director of Bergdorf Goodman before starting his own men's-wear line in 2006 with one express goal: to create the perfect pair of chinos. "What everyone had forgotten was that the chino is a really cool pant that can go with everything." An so began his task of rehabilitation: He introduced button-fly and skinny-but-not-too-skinny fits. The rise was low but not silly low. There were no pleats. The world took notice.

In 2007, Andy Dunn, then a student at Sanford, cofounded Bonobos, a company devoted to selling extremely well-fitting pant online. (Yes, the Bay Area is the unlikely mecca of chinos. Once the fruit capital of America, the climate there — high in the day and dropping precipitously after sunset—matches that of the Pacific Theater, where chinos were first widely adopted by the U.S. military.) Though Bonobos started in corduroy — a 21 wale — it was its washed chinos that took off. "Most American-made chinos," said Dunn in the company's New York headquarters, "are boxy and ill-fitting, and we knew we could change that." Bonobos introduced a curved waistband, which is to traditional waistbands what curved space-time is to regular space-time: a quantum step forward. Like other chino cartels, Bonobos offers a range of fits, from full, straight legs to slim, tapered cuts. (With four fits in 37 styles and 20 colors, Bonobos offers 2,900 potential combinations.) 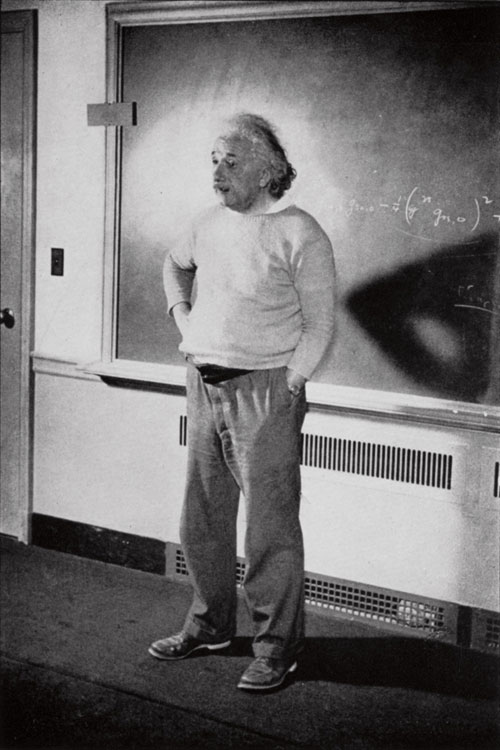 A few years later, Dockers wised up, too, recognizing that its chinos, once intended to break the mold of suit-wearing conformity, had become the mold worth breaking. "By the late aughts, we had become the very thing we had sought to destroy," admits Conklyn, who grew up wearing his father's Army chinos. In 2011, Dockers introduced its Alpha fit, a slim, low-rise rugged chino. "It was," Conklyn claims, "a game changer. All of a sudden, khakis became an affirmation." And the Alpha helped reposition Dockers as the chino of choice at Pitti Uomo and Magic trade shows, ground zero for cool hunters.

The past few years have been wild ones for the chino, and today's market is huge and its breadth massive. But at the same time, the chino chorus is beginning its antistrophe again: At the avant-garde end, fits are once again growing full. Designers from Burberry Prorsum to Brunello Cucinelli to Unis have started sneaking back a single pleat. The most fashion-forward of Dockers' lines features a slightly baggier fit and a single pleat. "It's sold in Europe," says Conklyn. Soon the same chinos will be worn by old-school, fashion-averse fathers and forward-looking sons alike. One will be normal, the other normcore. We are lapping ourselves.

Today's chino is yesterday's chino, which is tomorrow's chino, too, just as today's fathers are yesterday's sons and today's sons, tomorrow's fathers. We don't tend to see it like that, because it's a painful reminder of time passing and because nothing looks like it's moving when it moves with you. But from even the slightest remove, what seems so contemporary and relevant — be it a slim fit, a flat front, out own certainty of how good we look — is just a moment in the pendular swing of time and trend. Someday my sons will roll their eyes at my slim-fit, flat-front burnt-umber chinos. "Dad and his moose knuckle," they'll laugh. And I'll be like, "What?" and they'll be like, "Nothing, Dad." And that moment is coming sooner than I think.