The Hunt For the Great White Shirt

And how it became the Harry Dean Stanton of our closets.

---------------------------- With its beige carpet, ornate floral arrangements, and dark wood contours, the dress-shirt section of this ye olde men's store in New York City feels like an old-money country-club locker room (only minus the naked old guys). Cubbyholes filled with crisply folded dress shirts line the walls underneath discreet placards bearing Italianate names. There are few white shirts here, but they are rare air, a moment of silence, among the bold patterns and Dixie Cup pastels. "Nearly impossible," says Matt, a cubicle dweller of 27, of his quest to find the right white dress shirt. He's looked around here and there, tried on contenders, but over and over again he's been let down by fabric too thin or thick, flimsy buttons, blousy fits given to billowing, and collars so big he looks like Tony Montana. This store's best sellers, with their modified spreads and wide-open angles, are the type seen mostly at steakhouses and on trading floors. When the shirt is tucked into a pair of jeans, which is how he'll most likely wear it, its formality seems a little bit silly, like the top of him is at the law firm but the bottom half has been laid off. "I need a white dress shirt," says Matt, "that isn't so dressy."

We've been wearing white dress shirts for what seems like millennia, with the modern era beginning with the Arrow Collar Man, the square-jawed brawny brainchild of the proto-Don Draper, Earnest Elmo Calkins, who introduced the character in 1905. For 25 years, the Arrow Collar Man guided America's men to manliness, using not words but simply a look. And from The Man in the Gray Flannel Suit all the way up to Mad Men, the white dress shirt has been the strong silent type of our collective closet, holding the men who wear it to a rigor patterned shirts might not. Foreboding, it brooks no wrinkles, masks no stains. (Choose the wrong cloth and it won't even conceal your nipples.) Many men think—and even some designers themselves say—that the white shirt is a blank canvas, but men are not easels, and ties are not watercolors, and a white dress shirt is not a blank canvas. Instead, Alex Drexler of Alex Mill calls it a "hidden warrior." Liam Fayed of Bespoken calls it "the foundation." And Simon Spurr, the British designer who now heads Kent & Curwen and could spend an hour describing the three white shirts he offers in his spring lineup, calls it "the beginning of all men's wear." But Billy Reid puts it best. "A white dress shirt," says the Florence, Alabama, based designer, who spent months working on his current version, "is like Harry Dean Stanton. No one ever notices the shirt. They might notice the tie, the suit, but not the shirt."

The best of Reid's soft cotton shirts, called the Murphy, with its short spread collar, pocketless front, and gentle chambray texture, will never demand praise or overshadow the blazer under which it sits. When the white dress shirt does its job well, it, like Stanton, repels undue attention with its essential integrity. To put it another way, the white dress shirt isn't Muhammad Ali, it's Arthur Mercante, boxing's legendary third man. It's not Mick Jagger, it's the guy working the soundboard on the Stones tour. It's not Neil Armstrong, it's mission control. This is not an argument for its lack of importance but for an elevation of our awareness. 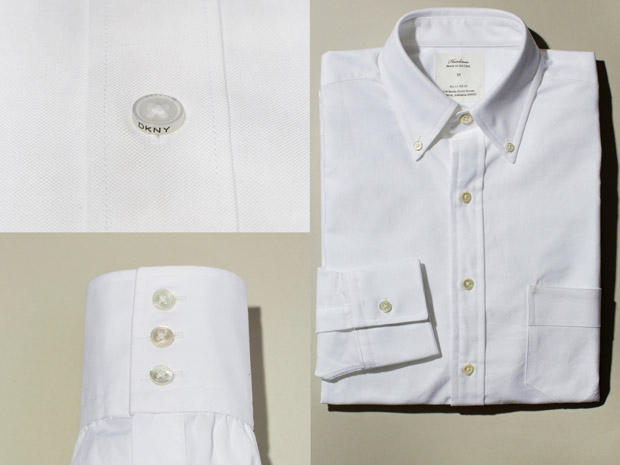 And we are becoming more aware. Men like Matt, who spent the better part of the past decade wearing preppy plaids and sprezzy stripes or some heritage such-and-such chambray, have started taking a serious look at white dress shirts while a legion of designers have put their considerable talents toward reinventing them (or, at the very least, making them relevant for men to whom relevance in matters sartorial really does matter). One theory behind the shift in attention: After the entire financial-services industry groaned and shat itself six years back, the white dress shirt—often framing the tanned face of a laid-low CEO—became guilty by association. And when the fashionable among us tired of the checks that look like watermelon-colored Sol LeWitts, the ginghams in so many shades of Skittle, and the regimental stripes that look like classy circus tents, we noticed that the white dress shirt, lonely in the Wall Street penalty box, was unspoken for. So we spoke for it. (Another theory: As everything else in our wardrobe got simpler, from our suits on down, our shirts literally followed suit.) White shirts never really went away, of course—there has always been a certain kind of man (vigilant against trends and unbothered by boxier fits) who preferred them above all others—so it's not like they're coming back into style. Rather, we are the ones coming back to white shirts, rediscovering their virtues and remaking them in our own image.

The white dress shirt has been the strong silent type of our collective closet, holding the men who wear it to a rigor patterned shirts might not. Foreboding, it brooks no wrinkles, masks no stains.

The best of these new shirts, of course, are not the same ones worn by Jamie Dimon or Lloyd Blankfein. They are not always so dressy, as Matt would put it. Their collars are typically small in height, restrained in stance, and may or may not feature buttons. (Unnecessary formality, in the form of point, cutaways, and spread collars, is eschewed, as are outré variations like the club, tab, and banded. The semispread reigns here, its angles like a tennis player's ready position, and the distinction between button-down and non, casual and non, has become increasingly irrelevant. Unless you're wearing a tux, in which case: never button-down.) These shirts can work as well with a tie as without one. (Seeded perhaps by hero worship of white-shirt demigods like David Lynch and David Byrne, there are growing legions who favor the ghost tie—a white dress shirt buttoned all the way up to here.) Many of these shirts forego the byzantine neck-and-arm system in favor of S, M, L. They have mother-of-pearl buttons and are made of a high-quality thread, no matter what the weave. They tend toward button-cuffs rather than the laissez-faire French. They are free of contrast-color stitching and look-at-me details. (Public School's Dao-Yi Chow and Maxwell Osborne always feature a white dress shirt, and Chow, who often wears only black, says, "You'd think white is the antithesis of black, but they're similar. Both colors are clean, pristine, and crisp.") And most critically, they can hang in any situation.

"My entire business started with trying to find the versatile white dress shirt," says Drexler, son of J. Crew impresario Mickey and founder of Alex Mill. He grew up wearing white shirts from the age of four, and "when I knew I wanted to make things [for a living], I knew it would be a white shirt with the right fit, the right details, and the right price point." Of his three styles, the best is by far the one made of oxford cloth, with its handsome mother-of-pearl buttons resting on a trapunto-stitched placket and a button-down collar. Under a blazer, it belongs, but shed the blazer and you won't be a shmuck in it, either. (Fabric should strive for that middle ground between nipple-exposing thinness and sweat-inducing thickness. Generally speaking, a weave like twill or an end-on-end will give the shirt subtle body and texture—you'll notice you have a shirt on—but won't preclude its use in either the dog days of summer or the witch tits of winter. Oxford, on the other hand, though as handsome as a basket weave can be, is more informal and warmer than its subtler cousins.)

And then there is the crucial matter of how a white dress shirt should fit. "The Bespoken customer," says Fayed, whose family also runs legendary shirtmaker Turnbull & Asser, "isn't going to go home after work to change. He wants a shirt that he can wear out and won't make people say, 'That guy came straight from the office.' " Bespoken's shirts are cut close to the body with high armholes, the better to prevent billowing and the like in the biceps and torso. (Turnbull shirts are cut more generously to accommodate the bodies success breeds, with larger, wider collars. But that is changing, slowly but surely, with Turnbull recently introducing a slim fit, the Slim St Jim, for the first time in its 130-year history. )

Matt is feeling good. After winding his way through different department stores and specialty shops, he's seen all the white shirts that Manhattan has to offer, and he's seen a couple that are just the way he pictured them at the start of his journey—confidence incarnate. White shirts, when they work, look good, and for Matt (and all the rest of us), looking good should never have to feel like work.