The Lifecycle of a Trend

How the pocket square went from nowhere to somewhere to everywhere (and not quite back again).

It usually goes something like this: We'll notice it first on a stranger on the street, or a friend from work, or a movie star or sports hero on a screen large or small. It's a tie bar. It's a fedora, a gingham shirt, a velvet blazer. An insignificant detail, yet we notice it anyway. And once we notice, we'll start seeing it more and more often on men who don't look terrible wearing it. We'll see what it's doing for whoever's wearing it—namely, un-lumping him from the rest of us—and either we'll choose to ignore it (not us) or we'll see it in a store or on a Website and think: Why not us? It'll feel strange the first time we wear it, but over time it'll feel natural before eventually feeling inevitable. Then we'll start wearing it less and less, deliberately or just because, until we stop wearing it altogether. Wear will eventually become wore, and one day we'll come across pictures of ourselves in it and we'll think, a little sheepish, Christ!

It was a trend, and trends never last forever.

"How did the pocket square become a trend?" asks the legendary sixty-five-year-old designer Joseph Abboud. "It's not a trend. A pocket square is an iconic piece of men's wear that has always finished a garment." He has a point, to a point. The pocket square, often cotton but sometimes silk, often patterned but just as often plain, has been part of a man's wardrobe since the days of Richard II. In earlier times, it was called other names, was tucked into different garments, meant something else. And for men of a certain age, like Abboud, who built his namesake brand in the 1980s and '90s on the back of Neapolitan-accented suits and is now chief creative director of Men's Wearhouse, it has been a constant companion, never out of style and therefore never in style. And yet most American men do not dress with the care and consideration and high Sinatraism of Joseph Abboud. Not too long ago, most men wouldn't have been caught dead in a pocket square. And then, well ...

"Whenever there's a trend, we have a desire to see a patient zero," says Jonah Berger, a professor of marketing at the Wharton School and author of the New York Times best seller Contagious: Why Things Catch On. "But individuals are often less important than we might think." Instead, a trend requires suitable conditions to thrive: Before there could be any pocket squares, there had to be pockets in which to put them. The late 1990s and early aughts caught the tail end of the chino wasteland that was business casual. Beginning roughly in 2003, a sizable number of men decided to start dressing up again. (The collapse of Web 1.0 and the recession of 2001 turned many professionals off the "oppositional cool" of dot-com culture, so they repaired to higher sartorial ground.) Sales of men's tailored clothing jumped 23.7 percent from 2003 to 2004, setting off a decade of year-on-year growth and coinciding with when Google Trends started tracking a rise in searches for "pocket square." Ariele Elia, cocurator of the Museum at the Fashion Institute of Technology's 2013 exhibit Trendology, frames this as the pocket square's incubation period. "Trends don't come out of thin air," she says. "And even though the earliest adopters account for just 2.5 percent of those who'll eventually participate in the trend, they are among the most influential."

“As editors, buyers, and bloggers converged in Florence, gazing at one another in the convention center, pocket square begat pocket square.

The earliest adopters weren't forced to start wearing suits again by some professional or social imperative—they opted to wear them, and with options come opportunities to personalize. And that's where the pocket square came in. In 2004, at stores like Bergdorf Goodman and Barneys, the pocket square started doing a brisk trade while the men's market, responding to the strident displays of peacockery, raced to feed the best. (Both Tom Ford and Thom Browne launched men's wear lines in the mid-aughts with pocket squares a-go-go.) In magazines, newspapers, and, beginning in 2005 with Scott Schuman's The Sartorialist, the nascent world of street-style blogs, the pocket square reemerged from obscurity. (The first post to appear on The Sartorialist was, of course, of a man wearing a pocket square. So was the second.) Cathy Horyn, writing in The New York Times in 2005, dubbed these early adopters "the new peacocks" and commented on "those little pocket square things that you see so many men sporting but can never master." Speaking to the Times around that period, Michael Bastian, then the men's fashion director at Bergdorf Goodman, noticed that more and more of his customers were forgoing ties altogether in favor of a pocket square in toto, and he issued an edict as fashion people do: "Now that guys don't have to wear ties, the pocket square has become the new tie." 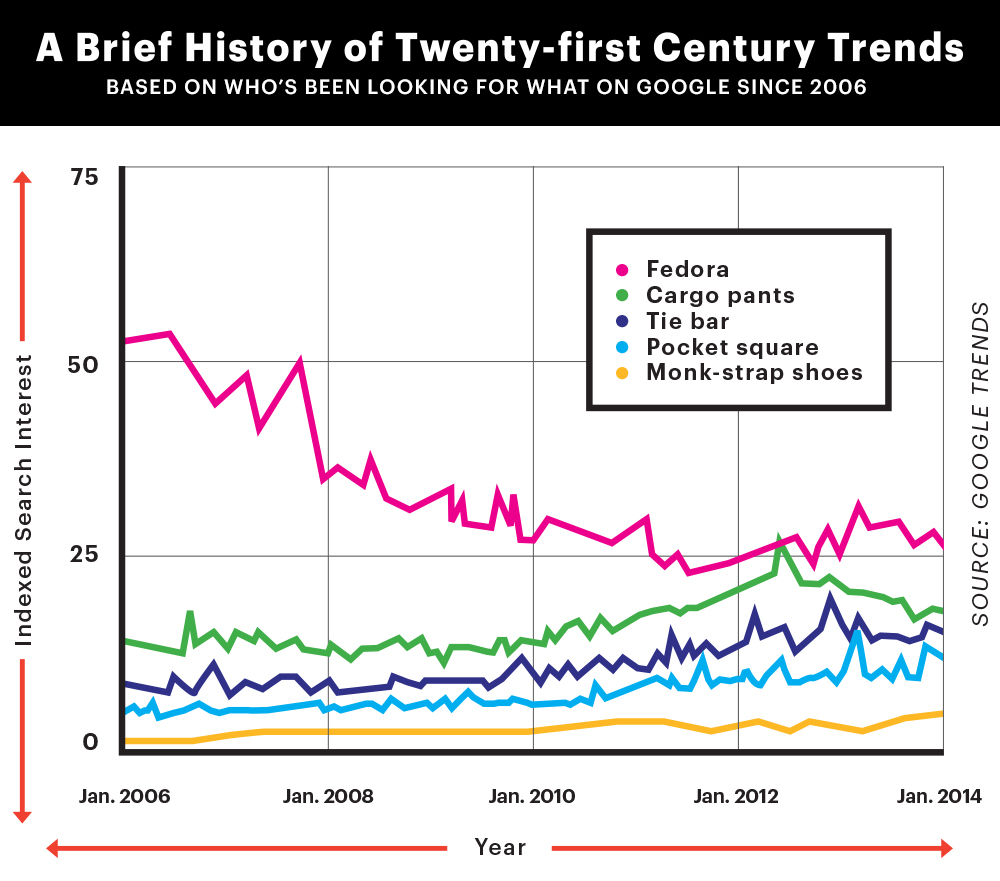 "In order for a trend to function," explains Steven Quartz, coauthor of Cool: How the Brain's Hidden Quest for Cool Drives Our Economy and Shapes Our World, "others need to be able to understand the inconspicuous signals it sends. If the signal is not understood by those you wish to understand it, the trend won't succeed." In other words, trends are language—or just noise if no one speaks it. For the first few years after the pocket square's reemergence in 2003, it was confined to the relatively moneyed, relatively few passing signals among themselves. To the rest of us, it was all just so much noise, such that when a new television show premiered in 2007 on a cable network that nobody watched, the show's costume designer, Janie Bryant, outfitted her hero in a pocket square despite her sense that "everyone thought pocket squares were just for grandpas."

Sixty-five seconds into the second episode of Mad Men, with 1.04 million people watching, a neatly folded white cotton pocket square appeared in a slate-gray suit beneath the chiseled jaw of Don Draper. What happened next was a prime example of what Quartz calls the status instinct, in which "those belonging to lower status groups emulate those of higher status and seek to raise their own status through emulation." With three million viewers tuning in every week and Mad Men quickly ascending into the firmament of the Golden Age of Television, "every man wants to be Don," says Bryant. "They want to dress like him, eat like him, be with women like him." And the answer was right there in his jacket pocket, at once familiar and foreign.

"Trends are a social act," explains Berger. "And men wore the pocket square because it signaled membership in a desirable group." Starting around 2007, that group happened to be the men of Sterling Cooper. This was when sales of pocket squares peaked at Barneys; it's when the pocket square started to make regular, unremarkable appearances on red carpets and award shows (its unremarkableness a sign of its increasing regularity); it's when it reemerged on James Bond's person (in Quantum of Solace) after a decade of mostly languishing in his top left-hand dresser drawer. Retailers of every size and most sensibilities either introduced them on their shelves or ramped up their offerings to meet the demand of the early majority, the 34 percent of trend adopters who hop on the bandwagon while the wagon is still accelerating. It then caught on with the late majority (34 percent of trend participants) and the late adopters (16 percent), and by 2010 the pocket square had gone fully mainstream.

Cue the following from a writer at this very periodical: "The fizzle and pop of a pocket square has gone flat, and the surest way a man can show his independent-mindedness—the very thing that he once did with a pocket square—is to go without one altogether." This happens with every trend: As soon as it approaches ubiquity, as soon as it conveys I follow rather than I lead, it becomes anathema to the in crowd who adopted it. "High-status consumers introduce a new taste, people of lower status emulate them," Quartz writes in Cool. "Higher-status people then abandon the taste because it's become popular among the lower status, and the next cycle of imitation-abandonment begins." All trends must die, valar morghulis.

However, something and a whole lot of someones came along to disrupt the natural death of the pocket-square trend: Tumblr, the blogging platform and social network that fueled an explosion in street-style coverage that often came marked with a simple hashtag: #menswear. Whereas earlier style blogs, like Schuman's, were tightly controlled cults of personality, Tumblr's anything-goes functionality opened the floodgates for pictures of an impeccably groomed gentleman with a soft-shouldered blazer, perhaps a scarf artfully draped underneath, double-monk-strap loafers on his feet, and an erupting piece of cloth in his pocket. The #menswear man was frequently photographed at fashion-industry events, none more prominent than Pitti Uomo, a biannual convention that retailers and designers have attended with relatively little scrutiny since 1972. Once the modern-day Robert Franks showed up and started posting their photographs on Tumblr, the early adopters who'd been this close to giving up the pocket square were back on the horse. "As soon as the Pitti look became street fashion," explains Lawrence Schlossman, the editor in chief of men's-wear blog Four Pins and cocreator of Fuck Yeah Menswear, a seminal Tumblr feed from the time, "the pocket square exploded."

As editors, buyers, and bloggers converged in Florence, gazing at one another in the convention center, pocket square begat pocket square. Perhaps the transmission would have ended there, but Pitti was and still is a working trade show, in which tastes are gauged and purchase orders placed. It was the finger on the scale in favor of pocket squares. After all, says Bastian, formerly of Bergdorf, "as a buyer, one of your jobs is to know what is go- ing on online and keep that in mind when deciding what to put on the floor." So the pocket square issued forth from Florence to stores across America, again.

But abandonment, once deferred, could not be deterred indefinitely, at least among the high status. In 2012, Billy Reid, the Alabama-based designer who once boasted a collection of squares five-hundred-some-odd strong, stopped wearing his. "I don't know why I stopped," he admits now. "Probably because they were so popular in my shop." Schlossman decided to forgo his, too. "One day I just didn't feel like putting on all that stuff. It just felt over," he says. "The fucked-up thing is you have these guys being told their Red Wings or their dub monks or their pocket squares are classics that will never go out of style. But of course they will. Everything does."

No trend lasts forever. But before we write the obituary of pocket squares and dab our tears with ... well, what exactly? consider this: They have never been more popular with mass retailers. Men's Wearhouse saw a 50 percent increase in sales of pocket squares in the past five years, even after seeing declines in fashion-forward markets like California and New York. And Jorge Valls, men's fashion director at Nordstrom, says, "Pocket squares have been growing for us in the past couple of seasons." It took twelve years, but pocket squares have become a permanent part of the American vernacular—beyond trending and beyond the reproach of those who purport to traffic in them. "We've cycled through minimalism and athleisure and who knows what else [since pocket squares]," says Schlossman. "Now Kanye wears something, it gets posted on Instagram, and it's a trend for two months." Which is all good for Mr. West. For the rest of us, we have pocket squares to wear as we see fit, and that is enough.