This Is the Next Step In White Sneakers

How white sneakers went from workouts and weekends to the whole wide world.

Prathan Peter Poopat picks a perfect pair of white sneakers from a pristine white shoe box. (Go ahead: Say it five times fast.) Their rubber soles not yet having known ground, their supple calfskin leather unbesmirched by scuff or scrape, the only branding a discreet series of gold numbers written on the heel, the sneakers are so white they seemed cut out of space, like an ex-girlfriend from vacation photographs. "These are our Achilles 1528," says Poopat, a cofounder of Common Projects, the New York–based company that, when introducing the first-gen white Achilles about ten years ago, had the audacity to charge more than $200 for a pair of sneakers not because they promised to increase a vertical leap or cushion a foot but because they were made with care.

A new pair of Achilles now runs about twice that, as white sneakers are caught up in the slipstream of high-end men's wear and ascending higher and higher in terms of price and quality. Louis Vuitton's Kim Jones created some $895 white sneakers for the house's current spring collection; the blokes from Rag & Bone spun out variations to the tune of three bills; Tomas Maier, the austere German who heads Bottega Veneta and his own eponymous label, introduced a $490 white suede-and-leather sneaker in his prefall collection, calling it "the modern brogue"; and then, of course, Parisian bottier Berluti delivered Playfield, a $1,290 calfskin-suede low-top sneaker, which represented one small step for well-heeled Berluti clients but blew the minds of everyone else when it debuted a few months back. (Alessandro Sartori, Berluti's artistic director, spent his adolescence wearing custom suits by Vitale Barberis Canonico and crisp white sneakers from Adidas. So it was only a matter of time before he brought his bosses into the sneaker game.) These new iterations, all pristine materials and old-fashioned craft meeting in an informal yet extremely well realized shoe, are no longer intended solely for weekends and workouts, like so many Purcells and Chucks and Vans before them. At these prices and at this level of quality and design, the new generation of white luxury sneakers belongs out in the wide-open world. 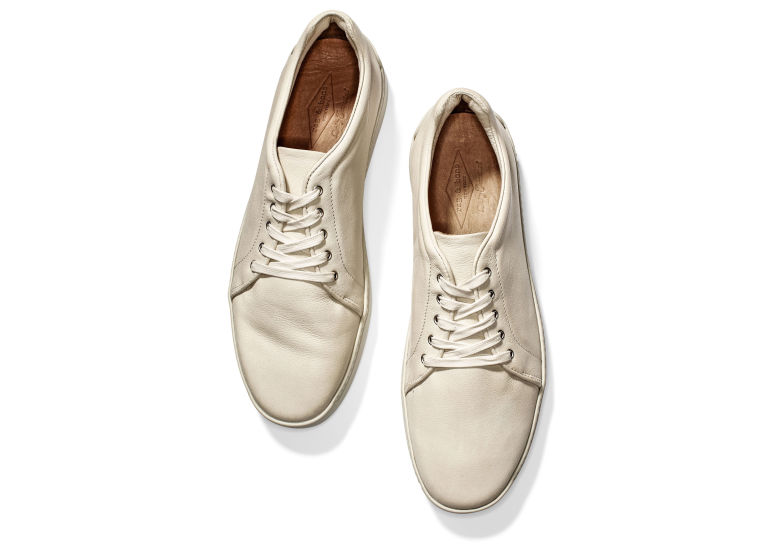 A crisp white sneaker ennobles any clothing—jeans and chinos, of course, but also well-chosen separates or a sharply cut suit. "Pairing a sneaker with a suit takes some of the formality out of the ensemble," says Liad Krispin, senior director of trend and influencer marketing for Adidas. "It shows the guy doesn't take himself too seriously," agrees Sartori. Or, conversely, it can also be read as a power play, the mark of a man who is clear about just how serious he is. "A suit with sneakers shows," says Poopat of Common Projects, "that you are powerful enough that you don't have to impress anyone." A good pair of white kicks proves that there's enough slack in the rope tying you to your role in society—you can be both you and it, professional and a person.

They also carry the myths of men who once wore them. Like so much of what we wear today on the street or on the runway, on our feet or on a Sunday, the inherent cool and fashionability of the white sneaker began with a man named Steve McQueen. The year was 1963. McQueen, a sort-of star after The Magnificent Seven but not yet afire, had just moved to Palm Springs, California, with his wife, a Broadway dancer named Neile. That spring, McQueen had agreed to let a photographer named John Dominis hang around for a while. One afternoon, as McQueen waited for his wife to get ready for one of their habitual treks into the desert—he was teaching her how to handle a revolver, a very McQueen thing to do—Dominis captured a picture of him (right) aiming a pistol at an unseen fireplace as he sat on a couch, his foot resting on a marble coffee table. On his torso was a short-sleeved button-front shirt; on his legs, a tight-fitting pair of chinos. And on his feet, a perfect pair of white canvas Keds. "That's all we wore back then," the former Mrs. McQueen—now a cabaret performer living in Century City—recalls. "Those were our desert shoes, our everyday shoes." When that photo appeared, it not only served to enshrine McQueen as a squinty antihero of great charm but also elevated his sneakers from the schoolyard into grown-ass man shoes.

By 1962, sneakers were giving so-called leather shoes—the loafers, brogues, and oxfords—so much of a run for their money in market share that a New Yorker piece about the changes in footwear, "Revolution," declared, "The leader of the revolution is the once lowly sneaker, sales of which have more than doubled in the past six years—a period in which conventional leather shoes have lost just under 10 percent of the total shoe market." This accelerated further with 1973's introduction of Adidas's Stan Smith, the by-now-iconic white leather low-top. Smith was a young tennis player at the top of his game, and his namesake sneakers quickly became on- and off-the-court staples. (Just how well-known the Stan Smiths remain was news to Stan Smith, who now lives in South Carolina and laughed about a talk with his daughter. "She said to me, 'Dad, you're famous! Jay Z said your name in a song!' ")

Jack, Stan, and Chuck have grown up and now want not for versatility and respectability.

So why the rush toward white sneakers now? Ryan Babenzien of Greats, a company that started selling handmade-in-Italy sneakers directly to consumers two years ago, sees it as the antistrophe of the formalized footwear of recent modern dandyism. "We've been living in a world dominated by wing tips and dub monks. But footwear is cycling down." For those who once clung to a strict hierarchy of footwear—polished lace-ups at the top, loafers and the like in the middle, lowly sneakers, street cleaners, at the bottom—there is now a sense that the world is flat. A well-made sneaker, even one—especially one—in summer-friendly, casual-leaning white, is becoming no less or more viable an option than a well-made loafer.

Jack, Stan, and Chuck have grown up and now want not for versatility and respectability. (Think what you will of the man as an artist, but there's a Jeff Koons element to all this. Koons's entire career has been built on instilling immense value in seemingly everyday objects. Take a look at his recent "Popeye" series, in which he—or, more accurately, his army of assistants—painstakingly crafted aluminum pool toys that differ from the Walmart variety only by a few hundred more zeros at the end. There is something of that, too, in the $400 white sneaker—an acknowledgment that it is man's lot to find value in even the most fleeting disposable forms.)